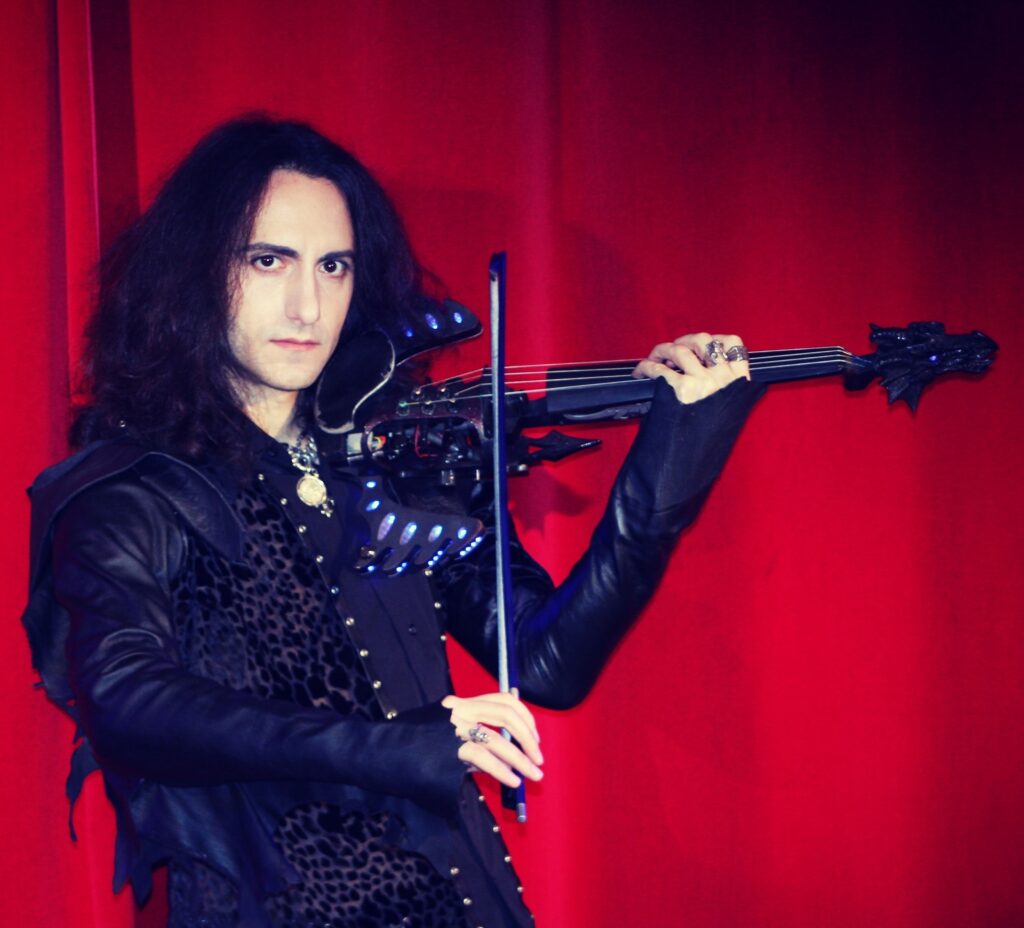 In my own words:

Since my childhood I adored music. At around fourteen years old, I have discovered Heavy Metal and Hard Rock sound, which I almost never heard prior, due to this type of music being illegal in my country. I fell in love with it on the first listen and beside the outstanding song melodies and vocals, I was drawn to the distorted guitar sound, which sounded magical to my ears.
Rock music excited me, and I became infused with it completely.

At the age of seven, my parents sent me to children’s music school to learn the violin where I studied for eight years.

But my heart was in Metal.
I wanted to become a singer in a Metal band, and my dream has come true when I was eighteen in Montreal, Canada. However, the circumstances have forced me to start utilizing violin professionally. I immediately proceeded to experiment with Rock and Metal – first on the acoustic, and after a few years – on my first electric violin.
I became completely enamored with the music and style of Guitar heroes in that time, namely Joe Satriani, Steve Vai, Al Di Meola, Yngwie Malmsteen, Eddie Van Halen, John Petrucci, Andy Larocque, Ritchie Blackmore, David Gilmour, Dimebag Darrell, Gary Moore, Jason Becker, Marty Friedman, Criss Oliva, Brian May, Vinnie Moore, Tony MacAlpine, Michael Schenker, Zakk Wylde, Alex Skolnick, Timo Tolkki, Jeff Waters, John Sykes, Paul Gilbert and later Buckethead, Mattias IA Eklundh, Shawn Lane, Guthrie Govan, Impellitteri and Nuno Bettencourt.
I wasn’t trying to copy them, but surely shared the same passion for this specific “shred guitar” or “singing” sound which they’ve used.

I hoped and believed that my input will be accepted by the majority in the Metal scene, but with time came a realization that I was still an outcast.
So I was developing alone, in a time when the Internet was still just starting, and buying a physical copy of CDs or Vinyl records was almost a ritual.

Since the mid-90’s I was actively creating a unique theatrical project, almost like a Rock opera, unapologetically mixing Metal, Rock and Pop music together. I was not just a songwriter and concept creator, but assumed a place of the “second guitarist”, only with a violin. Later I have completely replaced the guitar in my music with my violin.

At around 2006, when I was in New York, I finally got a stimulus to make a solo “Shred Violin” demo. First I did some covers as “String Division” and then wrote original instrumental tracks for “Paganini XXI Century”, the name for which was inspired by a radical and progressive violinist of his time – a legendary Niccolo Paganini.

A few years later I’ve collaborated with Eric Keebler to make a first electric violin that kept exact neck measurements of the acoustic, but with an exceptionally clear pick-up sound. Our first creation was named “Black Dragon” and featured an elaborate visual and technical design.
This instrument has allowed me to upper-up my game.
I was rapidly improving, taking on challenging covers from Steve Vai, Joe Satriani, Buckethead, Yngwie Malmsteen and some very good Pop and Rock tunes.
A highlight was a recording of “Spartan” video, that was based on my original “Spartan Glory” song.
It features a melodic rhythm violin riffs as well as a signature “Shred Violin” solo section.

Finally, in 2012, I was granted an opportunity to self-make an album.
I didn’t want to be constricted by the Heavy Metal sound, and felt that I could reach more audience if I will take on my original idea of fusing styles in a Rock opera type of concept.
It became “Home”, a conceptional album that follows a story line “from birth until death” of a person.
In this album I’ve shown maturity as a songwriter and competent player both on rhythm and solo violin.
Sadly, I lacked any type of funds and couldn’t properly promote it, and so the album went completely unnoticed.
The elaborate circumstances has demanded a correction in my social and immigration status, and so I had to say goodbye to the USA.

I’ve had many more years of extreme difficulties until I was able to play concerts again.

Then I have landed in Germany.
It was also not easy to continue my development here, and I was forced to completely abandon the usage of my electric violins, just to make ends meet with the acoustic.
I’ve invested my time to improve my technique on acoustic violin and worked with many original songs that I previously only performed on electric, plus learned hundreds more cover songs from multiple genres and time periods.
Starting in 2022, I am preparing for a recording of a new album. I have an idea to remix and partially re-record “Home” album in its entirety. The main difference from the original will be that it will be preformed on the acoustic violin. This time I will put all of my efforts in actively promoting the album on the Internet, once it will be released.
If I will succeed to reach and create larger fan-base, I will be able to afford writing and recording completely new music. That will mark the return of the “Shred Violin”.